A+E Networks® UK has commissioned Studio71 UK, a Red Arrow Studios company, for a returning series of Forged with Steele starring 22-year-old blacksmith and YouTube star Alec Steele, to be broadcast on SKY HISTORY in early 2021.

Forged With Steele follows blacksmithing wunderkind and renowned YouTuber (2+Million subs) Alec Steele, as he creates an array of iconic weaponry from across the ages. Steele draws on his love of history and incredible talent for blacksmithing, honed over a decade, to examine some of the past’s most deadly weapons.

Alec has now made a big move from Norwich to the wilds of Montana, where – with his new and equally youthful bladesmith friend, Will Stelter – he is plying his unique trade among the farmers, miners and ranchers of the famous ‘Big Sky Country’.

The new 12×30 series follows Steele as he crafts a new set of impressive apparatus from a number of historical eras. In the series, he acquires ancient skills including gem-setting, inlaying and engraving, to reconstruct more of history’s most remarkable armaments,  including the mighty 16th Century Zweihander – sword which stands at 1.4m high,  an ornate Cavalry sabre inspired by those used in the  American Civil War, as well as a wicked-looking scythe, worthy of the Grim Reaper, and eighteenth-century naval boarding axes. Steele also tries his hand at playful – but deadly – concealed weapons such as Chinese rope darts and a sword cleverly disguised as a cane. 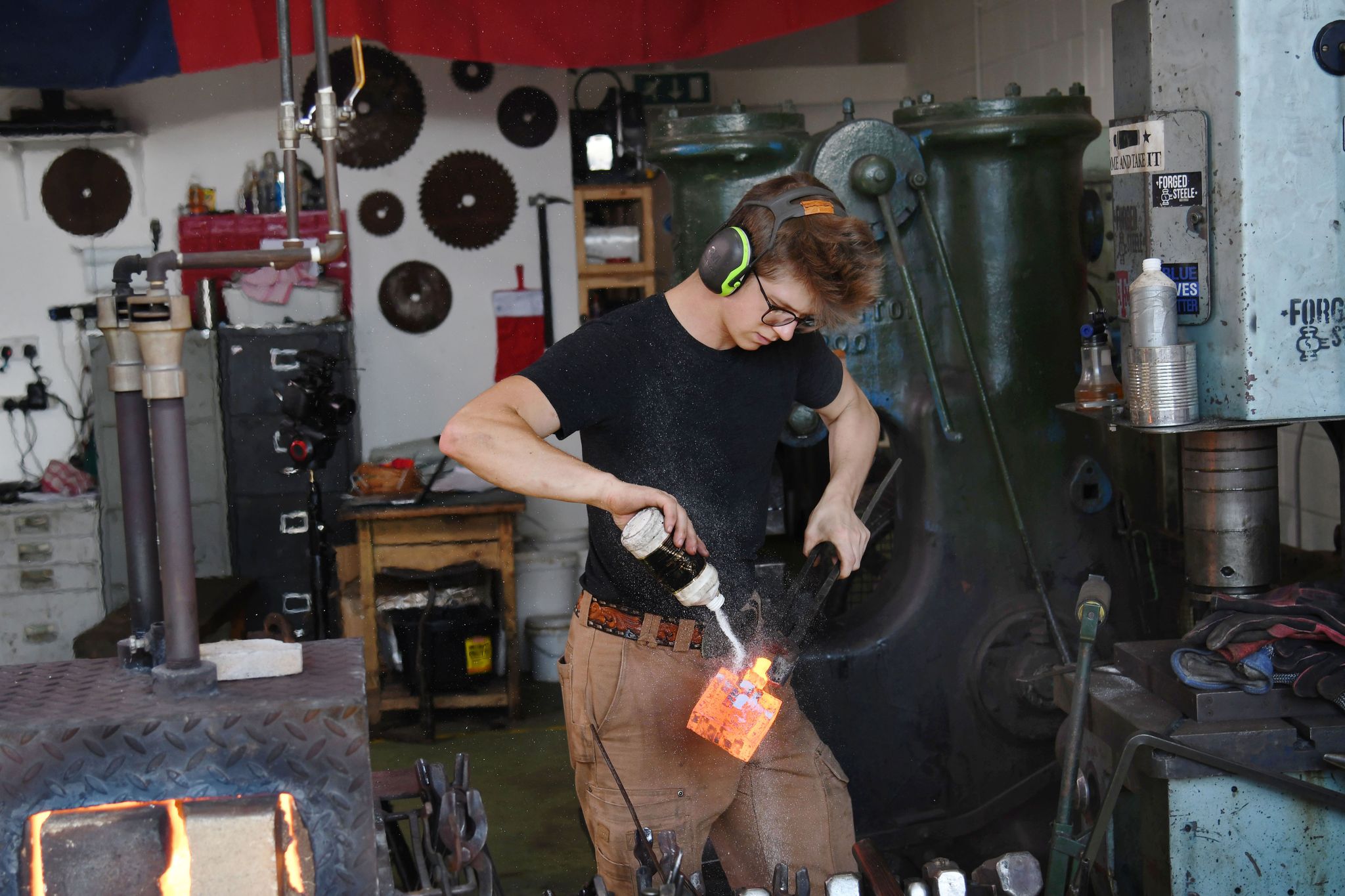 Steele was first introduced to the art of blacksmithing when he was just 11 years-old at a county fair and over the years has documented his blacksmithing journey and technical prowess: amassing an audience of over 2 million subscribers and a staggering 340+ million video views on YouTube.  In 2017, HISTORY profiled him for the series Forged in Britain, which explored the lives of five contemporary forgers in the UK. His first series, Forged With Steele, premiered on HISTORY UK in October 2018 and followed the young blacksmith at his workshop in Norwich.

In this new series, viewers are invited to Alec’s new base in the Western US state of Montana where he now resides. His impressive new space has been equipped with a vast range of tools – both modern and ancient – to tackle his new challenges.   Along with his remarkable array of historically recreated weapons and tools, he also has a growing sideline in clothing and merchandise as well as apparel for his other great love – cycling…

Alec Steele says “I’m so excited for the launch of series 2 of Forged With Steele where viewers can follow me as I create even more of history’s most astonishing weapons. Since series 1, I’ve advanced my blacksmithing skills and begun learning the art of gem-setting, inlaying and engraving so I can recreate these incredible pieces of history with even more detail.”

Dan Korn, VP of Programming at A+E Networks® UK commented: “We’re delighted to welcome Alec back to Sky History, together with a new talent in Will Stelter. Their expertise and crafting skills are mesmerising and their enthusiasm is infectious.  This really is history in the making”

Jody Smith, VP Creative Director from Studio71 UK, added: “We’re thrilled how well the first series performed for HISTORY and it’s great to get back in the workshop with Alec, whose skills continue to amaze us, as he takes on even more ambitious projects in this second series. We’re pleased to have introduced Alec to a new audience that have embraced him on TV as they have done on YouTube.”

Forged With Steele series 2 is currently in production and scheduled for early 2021 on Sky HISTORY, available on Sky, Virgin, BT and Talk Talk.

HISTORY became Sky HISTORY on 27th May on all broadcasting platforms across the UK. For more information about Sky HISTORY, click here.

Alec Steele has documented his career by creating videos around his passions for both steelwork and history. Continuing his progress in Series 1 of Forged with Steele, for the second series, the craftsman will forge a new set of iconic weapons, demonstrating his technical ability and vast knowledge of history to create each one. Leaving school at 16 to pursue his craft, Steele initially began making bespoke tools and products but soon discovered there was a huge audience eager to follow his journey into the field. Now with over 340 million views and over 2.15 million subscribers to his channel on YouTube alone, he’s tapped into a highly engaged market that shares his love for the ancient art of blacksmithing.